There’s been some debate about whether independent conservatarian candidate Aaron Day (former chairman of the Free State Project Board of Directors) cost Republican Kelly Ayotte her U.S. Senate seat at this past election. Skeptics point to the fact that Day and Libertarian Brian Chabot between them about equaled Gary Johnson’s vote percentage in the presidential race (Johnson-Weld got 4.2% in New Hampshire, Chabot and Day between them about 4.1%). They say Day merely siphoned off Libertarian voters from Chabot, not Republican voters from Ayotte.

To try to see whether Day was siphoning off Republican or Libertarian votes, I looked at town-by-town results for all 239 New Hampshire jurisdictions with voters in this race. I then looked at how the number of Libertarian and Republican presidential votes by town correlated with Day’s support. The results are in the figure below. 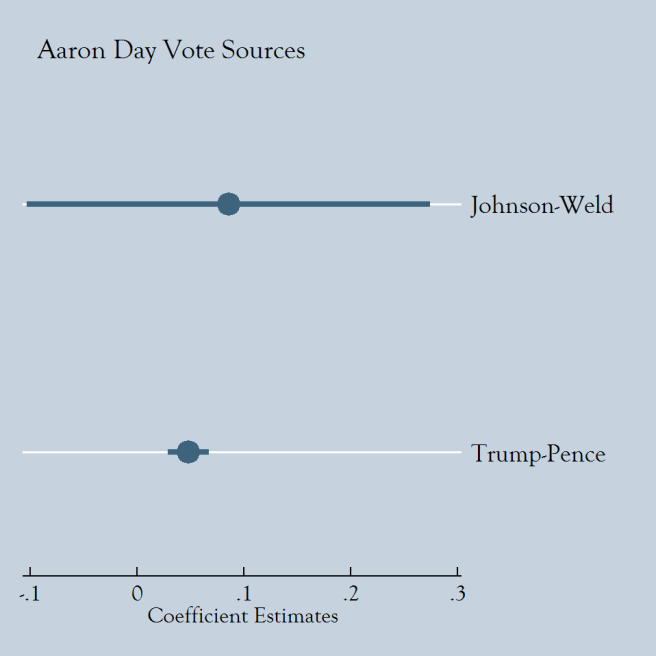 The coefficient estimate on percentage of the vote for Trump-Pence in a town is 0.05 and is highly statistically significant, as you can see by the tiny confidence interval on the estimate. This estimate means that for every 20 additional Trump-Pence voters in a town, one additional voter cast a vote for Day in the Senate race.

The coefficient estimate on percentage of the vote for Johnson-Weld in a town is 0.08 but not statistically significant. This estimate implies that for every 12 additional Johnson-Weld voters in a town, one additional voter cast a vote for day in the Senate race — but again, we can’t be sure this is really any different from zero.

Day’s vote share was a little more than one-twentieth of the Trump-Pence ticket’s in New Hampshire. In other words, we can be reasonably confident that almost all of Day’s electoral support came from Republicans, not Libertarians.

To verify that Day specifically was the spoiler, not Brian Chabot, we can do the same exercise for Brian Chabot’s vote shares by town. The figure below shows those results.

Look at the difference! Chabot pulled overwhelmingly from Johnson-Weld voters. For every four additional Johnson-Weld voters in a town, Chabot got an additional one vote. Meanwhile, Chabot did siphon a few Republicans. For every 80 additional Trump-Pence votes in a town, Chabot got about one vote. Still, these results suggest that over half of Chabot’s support came from Libertarians, not Republicans.

Now, Kelly Ayotte lost by 1,000 votes, just over 0.1 percentage points. My estimates suggest that without Aaron Day in the race, Kelly Ayotte would have won her race by about 15,000 votes, similar to Republican Chris Sununu’s margin of victory in the governor’s race.

Is it possible that without Aaron Day in the race, those 16,000 or so disaffected Republicans would still have voted for some other third-party candidate or a write-in, or just that race blank? Sure, it’s possible. We can’t rule out that possibility because we can’t do an experiment in which we randomly assign some towns’ ballots to have Aaron Day on them and some not to have him on them. But at minimum these results strongly suggest that Kelly Ayotte disaffected a decisive share of Republican voters who went for Trump and Sununu but not for her.