Did the emergence of the state reduce the rate of human death from warfare? Steven Pinker's outstanding book, The Better Angels of Our Nature: Why Violence Has Declined, surveys many reasons why you are less likely to die from violence today than your ancestors were. Part of his explanation is that warfare was constant in … END_OF_DOCUMENT_TOKEN_TO_BE_REPLACED

Classical Liberalism and the Austrian School is the latest collection of essays from Ralph Raico, published by the Ludwig von Mises Institute. Ralph was kind enough to send me a print copy. The introductory, eponymous essay concerns the relationship between Austrianism as an economic methodology and classical liberalism as a political program or ideology. Raico … END_OF_DOCUMENT_TOKEN_TO_BE_REPLACED

This post is about three books I've polished off recently, all quite different from one another: Timothy Besley & Torsten Persson, Pillars of Prosperity: The Political Economy of Development Clusters - nothing to do with industrial districts or network externalities; this is a (mostly) theoretical exploration of the reasons why rulers might choose to invest … END_OF_DOCUMENT_TOKEN_TO_BE_REPLACED

Few in power find it convenient to notice inconsistencies in their own conduct. Alas, but President Madison was no exception. Federalism and decentralization exist precisely because free constitutions should not depend on the good graces of those in office, but on the checks necessary to harry them back under the law. Seeking the financial means … END_OF_DOCUMENT_TOKEN_TO_BE_REPLACED

When tensions with England finally began to degenerate into violent altercations, first on the western frontier in such places as Tippecanoe and later along the Great Lakes, the Madison administration decided the time had come to vindicate America’s claims of offended sovereignty. Unsurprisingly, these claims also happened to coincide with popular desires to expand into … END_OF_DOCUMENT_TOKEN_TO_BE_REPLACED

With the war in Europe between France and England intensifying, Americans found their rights as neutral traders regularly violated by both French and British navies, and French and British port restrictions further limited American opportunities for commerce. To make matters worse, on numerous occasions, English vessels had boarded American ships and “impressed” many of their … END_OF_DOCUMENT_TOKEN_TO_BE_REPLACED

I recently came across this interesting, five-year-old interview with law professor William Ian Miller on "talionic" law in the Middle Ages, which specified literal "eye for an eye" justice. Talionic law developed in societies that lacked stable state institutions, like Iceland and early England. As such, it was embedded in strong extended-family institutions that used … END_OF_DOCUMENT_TOKEN_TO_BE_REPLACED

Not long after the ratification of the Constitution, Madison came to have serious doubts about his former Federalist friends. Particularly, he came to suspect the sincerity of many who had asserted that the new government would possess only those powers specifically delegated to it. The first disappointment came with Hamilton’s championing of the incorporation of … END_OF_DOCUMENT_TOKEN_TO_BE_REPLACED

New York was Hamilton’s great project. So closely divided was the state, that at various moments, he despaired of its coming into the union. At one point the Antifederalists offered a compromise. They would support a conditional ratification dependent on the passage of certain key amendments, including the all important construction of delegated and reserved … END_OF_DOCUMENT_TOKEN_TO_BE_REPLACED

I just finished reading Ralph Raico's total evisceration of Winston Churchill. According to Raico, Churchill was throughout his life dedicated to two ends: his own power and the making of war. Every other principle he "ultimately betrayed." Among Churchill's sins are accounted the following: violating the international laws of war in blockading food and medicine … END_OF_DOCUMENT_TOKEN_TO_BE_REPLACED

Among the defenders of the Constitution, a great deal was said about the states as a check to the power of the national government that informed the first ideas about interposition.  Madison’s contention in Federalist 39 is well-known. Our union was to be “partly federal and partly national.” Among the premier federal attributes were such provisions as the equal … END_OF_DOCUMENT_TOKEN_TO_BE_REPLACED

A rumble can be heard emanating from assemblies and governor’s mansions across these fruited plains. It is a sound reminiscent of by-gone days that echo down through centuries of constitutional thought. Prompted by everything from unfunded Congressional mandates to the new omnibus healthcare bill, (See here and here) these reverberations strike cords of distant legal memory that … END_OF_DOCUMENT_TOKEN_TO_BE_REPLACED

The first of a series will begin tomorrow, the Ides of March (the 15th), an appropriate time to initiate an investigation of interposition and federalism in America. On that date in 44 B.C., Julius Caesar was slain for his offences against the Roman Republic. It was a futile act of desperation. The empire was not … END_OF_DOCUMENT_TOKEN_TO_BE_REPLACED 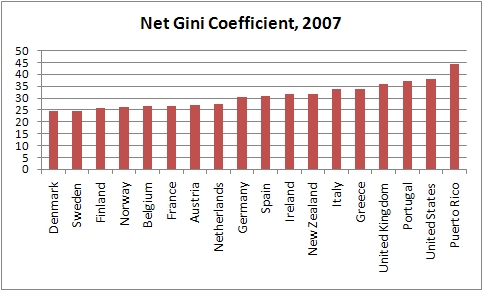 Is the U.S. exceptionally unequal? Quite the opposite - among New World countries with a history of slavery, the U.S. has by far the lowest income inequality.

In prepared remarks, Michele Bachmann said this: Joe Biden liked to tell audiences this election cycle that, quote, "This is not your father's Republican Party." Well, for once he was right. It's a lot closer to being our Founding Fathers' Republican Party. (emphasis added) Facepalm.

For the American right, the United States is exceptional for its political commitment to freedom. For the American left, the U.S. is exceptional as an outlier of injustice and inequality relative to other advanced democracies. In a four-part series, I will investigate these claims of American exceptionalism and argue that both have some element of … END_OF_DOCUMENT_TOKEN_TO_BE_REPLACED

Whenever I'm at a loss for blog material, I can just check out the latest Krugman column. This Sunday's pleasure was entitled "1938 in 2010," and I'll just quote the silliest bit: From an economic point of view World War II was, above all, a burst of deficit-financed government spending, on a scale that would … END_OF_DOCUMENT_TOKEN_TO_BE_REPLACED

Nationalism generally predicates itself on cultural attributes, but it often destroys the rich diversity of culture that was the legacy of premodern societies. The descendants of Arabic-speaking Jews who leave for Israel or the United States will speak Hebrew or English, and the identity will eventually disappear, amalgamated into broad, generic identities politically supported by the states that now depend on nationalist sentiment to help field armies and keep the taxes paid.

Western ideas remained barbaric and inhuman, at least relative to those of the Indian "savages," up until quite recently. Liberalism came about because of the openings created by regime incoherence and competition, as well as the smoothing effects of trade.