On September 27, Catalonia, an “autonomous community” of Spain, votes in a regional election that will likely determine whether the region declares independence from Spain. The Economist and other global news outlets have generally not taken the movement very seriously, which is a grave mistake. According to a series of new polls, the independentists are likely to win this election, and if they do win, they will pursue a roadmap ending in a proclamation of independence within 18 months. It would be the first secession from an industrialized democracy since either Iceland (1944) or Ireland (1922), depending on how you count (Iceland had full internal self-government from 1918).

Catalan independence may well be a good outcome for the world. There are several reasons why Catalonia is likely to be more successful as an independent state than Scotland would have been.

First, Catalonia is significantly wealthier than the rest of the Spain and suffers a significant annual net fiscal drain to the Spanish treasury, on the order of 6-10% of GDP. Catalonia is also the least corrupt region of Spain.

The stock markets also suggest that independence might benefit or at least not hurt Catalonia. I examined the INDEXCAT produced by the Barcelona stock exchange, an index of all Catalan-owned, publicly traded companies on its exchange, to see how its prices responded to changes in the probability of independence. Since September 11, 2012, when the independence movement reached a popular crescendo on the streets, the INDEXCAT has grown 48.7%, compared to 26.2% for the IBEX 35 index of major Spanish firms, to 31% for the German DAX, to 24.4% for the Dow, and 21.6% for the EUROSTOXX index. This chart produced by the Catalan Business Circle shows that the fastest growth for the INDEXCAT occurred during the period when independence seemed most likely to occur, the late 2012 to late 2013 period when support for independence generally topped 55% of those expressing an opinion in yes-no questions and it still seemed possible a true referendum might be held. 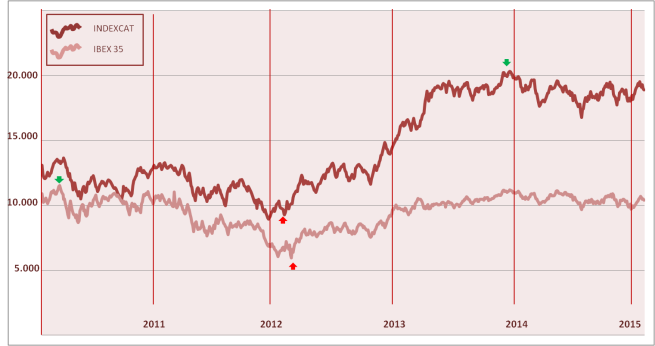 Then I looked at how the INDEXCAT responded to the recent turnaround in polling for the September 27 elections. After several months of declining support for independence and independentist parties, public opinion started to turn around dramatically just two weeks ago. (Right after I predicted it would!) There have been three “polling shocks” since September 1. (The English-language Wikipedia article on these polls is rapidly and accurately updated.) The first and most significant occurred on the night of September 3, when three polls were released, all showing a pro-independence majority, after a series of July and August polls showing the independentist lists well short. We should expect investors to update their views about the likelihood of independence immediately and to trade on those views as soon as possible. Within a few minutes, the new market prices should reflect the public information. The INDEXCAT dropped just 0.31% between close on September 3 and five minutes after opening on September 4. That is consistent with a small negative impact of independence on major Catalan firms, but let’s look at the other shocks.

On the morning of September 9, a modest negative polling shock occurred, as following a string of four polls showing a clear independentist seats majority, a poll from the respected Spanish government research outfit CIS showed the slenderest of possible majorities for the independentists, just 68 out of 135 seats. It’s hard to figure out exactly when that information went public. A single tweet with the results went out at 9:00 AM exactly, but it seems to have broken an embargo, and those results weren’t confirmed until 9:30. In any event, between 9:00 and 9:10 AM, the INDEXCAT fell 0.22% and didn’t change much over the following hour. These results are consistent with a small positive impact of independence on major Catalan firms.

Finally, over last weekend a new series of polls seemingly have shown the CIS result to be an outlier, once again confirming a clear seats majority for independentists. Between market close on Friday and 9:05 AM Monday, INDEXCAT rose 0.26%. This outcome is consistent with a small positive impact of independence on major Catalan firms.

Unfortunately, I cannot calculate the expected value of independence for publicly traded Catalan firms as I did for Scottish companies, because there are no betting markets on Catalan independence or the majority in the coming election. (Unbelievable but true.) Still, on balance, the results suggest that investors expect Catalan companies to become more, not less, profitable with independence. In turn, that finding implies that the transition costs of independence are excessively hyped.

The second reason why I think Catalan independence may be good for the world is that the Spanish government has not given any concessions to Catalans to prevent them from voting for independence. To the contrary, Spain has tried to recentralize powers and has even hinted at using military force against Catalans (almost certainly a bluff). The contrast with Britain’s response to Scotland could not be stronger. If Catalans vote against independence, it would send a bad signal to Spain: that threats work to deter secessionism. Moreover, it would leave Catalonia and all the other autonomous communities vulnerable to even more severe recentralization policies. Unilateral disarmament more often invites aggression than defuses it.

The final reason why Catalan independence would be good for the world is that Spain’s existing pattern of decentralization is dysfunctional, as just about everyone recognizes. Spain’s autonomous communities racked up excessive debt during the 2000s boom and have required bailouts from the central government (PDF). Those bailouts establish a moral-hazard incentive for autonomous communities to continue profligate spending and rely on the central government for assistance when borrowing becomes difficult. Why did the autonomous communities rack up excessive debt in the first place? Stanford political scientist Jonathan Rodden has shown that when there are no external balanced-budget requirements on lower-level governments in decentralized systems, the only way to encourage fiscal discipline is to require the lower-level governments to pay for their own spending mostly out of own-source revenues and to make credible promises to let these governments go bankrupt if they cannot pay back their bondholders. The bond markets then provide fiscal discipline: subcentral governments maintain fiscal discipline because if they borrow too much, they will end up paying higher interest rates. But what happened in Spain was that the autonomous communities (with the exception of Euskadi and Navarre) had vast spending rights and responsibilities but few sources of independent income. They depended on central government grants, and thus had little incentive to spend the money responsibly. So you got things like this.

If Catalonia leaves Spain, it will be a significant fiscal shock to Spain. One relatively easy way for the Spanish central government to deal with the shock is to reduce transfers to the autonomous communities and allow them more independent taxation powers. The autonomous communities will complain about the burden-shifting, but the more nationalist communities will be happy to enjoy more fiscal autonomy. Moreover, fiscal competition between independent Catalonia and rump Spain could encourage both governments to adopt more efficient and less corrupt policies.

Catalonia isn’t a free-market paradise. For instance, the regional government passed a protectionist law limiting shop hours that the Spanish government wisely overruled. Politics throughout the Mediterranean region are toxic right now, and Catalonia is not immune. The European Central Bank’s unconscionable policies of monetary austerity have kept southern Europe in economic crisis for years, and the region’s voters have turned against wealth creation and free markets as a result. That’s a different problem with different solutions. But in the medium term, would you rather see Catalonia as part of a Spain ruled by a coalition between the corrupt left (PSOE) and the extreme left (Podemos), since the PP will lose the next election, or would you rather see an independent Catalonia in which the largest party has always been of the center-right (Convergence)?