Last week Attorney General Eric Holder announced that the Department of Justice would be suspending its adoption of state civil forfeiture cases through its “Equitable Sharing” program. To review, civil asset forfeiture is the procedure by which law enforcement seizes property suspected of having been associated with a crime, and then auctions it off and uses the money for its own purposes. Under federal law, asset forfeiture is easy: the agency must simply show by a preponderance of the evidence that the property was associated with a crime, and then the owner bears the burden of proving her innocence. Under the Equitable Sharing program, the Department of Justice “adopts” state cases in states in which forfeiture laws are stricter, thereby implicating the weaker federal standard, then shares up to 80% of the proceeds of these forfeitures with state and local law enforcement.

According to the WaPo story, only 57% of Equitable Sharing proceeds came from state-only investigations, so the new policy should cut payments to state and local agencies by about half. When it comes to big forfeitures, the new policy creates an obvious incentive for local law enforcement to bring in a federal investigator to create a pretext for adoption. Moreover, many of those forfeitures that are no longer adopted will still be pursued under state law, simply with a higher evidentiary threshold in many cases. Thus, the total amount of civil forfeiture that occurs in this country can be expected to drop by only a small fraction of the current annual average total.

To get a better sense of how this policy change will affect asset forfeiture in the states, I will present some numbers from the new asset forfeiture dataset that we are compiling for the fourth edition of Freedom in the 50 States. We have data on Equitable Sharing proceeds by state from Fiscal Year 2000-01 to Fiscal Year 2012-13, as well as detailed information on state standards for forfeiture. 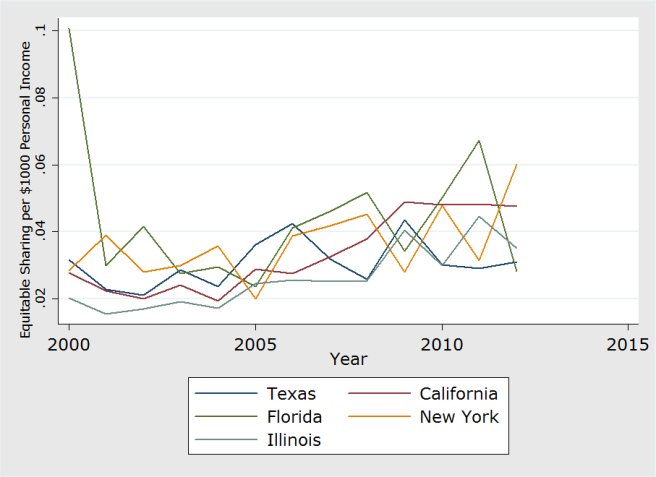 As the chart shows, Equitable Sharing really began to ramp up in 2006-07. By 2012-13, these five states combined for $228 million in forfeiture revenues from the federal government. For each of the last four years, California was first or second among these five states in forfeiture revenue as a share of the state economy. Probably not coincidentally, California has some of the toughest procedures for civil forfeiture in the country.

In the U.S. as a whole, Equitable Sharing forfeiture revenues totaled $486 million in FY 2012-13, more than double the total of 2004-05. We don’t know just what the total value of assets forfeited in the country is, because states and localities don’t often keep track of the data. Moreover, the Equitable Sharing program includes proceeds of criminal as well as civil forfeiture (criminal forfeiture upon conviction is much less controversial). But from the states for which we do have data, it appears that, at least in the early 2000s, total assets forfeited through state law amounted to about 20-50% more than what the states got from Equitable Sharing. Those figures undercount the losses to victims of forfeiture, because agencies get, at best, market value for what they seize. So it’s quite possible that each year, more than $1 billion in value is taken from property owners through civil asset forfeiture.

Now that the Equitable Sharing program is being curtailed, state laws will matter more. Which states are best positioned to protect property rights in the new order? Here’s a ranking of states as of January 1, 2015 on citizen protections from civil asset forfeiture, based on the burden of proof for showing that the property was connected to a crime, whether there is an “innocent owner” rebuttable presumption, where the proceeds of asset forfeiture go (when they go to the forfeiting agency, there are more incentives for abuse), and whether the state had put any limits on Equitable Sharing already:

With any luck, Holder’s decision will inaugurate a new round of forfeiture reforms at the state level, as legislators realize that they once again have the power to set policy for their own officials.