Catalan President Artur Mas gave a major speech tonight, which fortunately Liz Castro live-translated on Twitter. To review, here’s where we are now: Catalonia held an informal plebiscite on independence on November 9, which the Constitutional Court had suspended, and 81% of voters supported independence. The Spanish state has refused to negotiate any constitutional revision that would permit a binding referendum on independence, and the state prosecutor has filed criminal charges against Artur Mas and two other cabinet ministers for going ahead with an informal poll. And a new poll (not from CEO, the Catalan government pollster) shows significant majority support for independence among those with an opinion, including support for a unilateral declaration of independence if independentists win the next election.

Since Spain has closed off all legal means to secession, the Catalans are now looking at extralegal means. In tonight’s 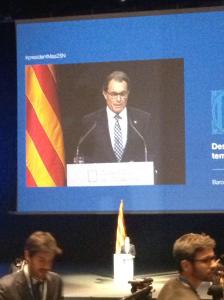 address, President Mas endorsed “plebiscitary elections” to the Catalan Parliament (previously discussed here). A unified pro-independence list would run in early elections, and if and only if that list obtained a majority of votes and seats, the new Catalan Parliament would declare its intention to secede. Within 18 months, it would set up the institutions of a new state and set the framework for elections to a constituent assembly that would draft a new constitution and declare independence. Anyone who runs on the unified list in the next election would be ineligible to run for the constituent assembly in the subsequent election. Mas himself says he will step down from Parliament at the end of the 18-month term if the plebiscitary election yields a pro-independence majority.

There are likely to be several consequences of Mas’ announcement. First, ERC seems to have little choice but to accede to Mas’ terms and timeline. If they refuse, Mas does not need to hold early elections; the independence process stalls. Since ERC are riding high in the polls, they can expect prime placements on the unified list – another reason to come to terms. Second, the reactions from civil society have so far been very positive (for instance, from the Catalan National Assembly). There is likely to be a lot of good feeling among Catalan independentists as a result of Mas’ speech. Third, CUP is likely to see its vote squeezed. Since independence will require a majority vote for the unified list, pro-independence voters will be taking a huge risk by voting for any other party.

Two years ago, I didn’t think the Catalan independence process would get this far, though I did think it possible. The negotiations over a unified list will be difficult, but unless something fundamentally changes Catalan public opinion in the next few months, I now think it likely that a unified list will be formed, and new elections will be held in spring. There will be a massive “tax disobedience” campaign as independentist Catalans pay their taxes to the Catalan government rather than to Spain, and Catalonia will have passed the point of no return.

2 thoughts on “Catalan President Lays Out Road Map to Independence”