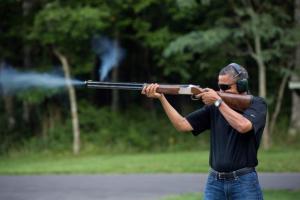 I’m really just kidding as I also shoot rifles and shotguns lefty (though pistols right-handed) and few serious people would accuse me of being a man of the left.  Moreover, I think the traditional left-right scale is fairly unhelpful (see here).

But I do find the release of this photo by the White House to be pure propaganda and thus offensive to the democratic spirit.

First, does anyone really expect us to believe that this Harvard-trained, elite, Chicago libgressive is a big shooting enthusiast?  Of course, someone with that profile could be.  However, it is very unlikely.  I can count the number of northern academics and elites who regularly shoot guns on my fingers (hello Marc!).  And none of them are Democrats.  Of course, there is the big Vermont anomaly – but I don’t think Barry would agree with the Green Mountain State’s gun control regime (which is basically this: aim well and point your gun downrange- for now).  More importantly, there is little support for any claim that Obama is a shooter.  That is why this Onion piece works as humor.  Heck, the guy couldn’t even pretend to be a decent bowler!

And this is fine. Just because I like to do something and have the right to do it does not mean that others have to agree with my preferences.  Indeed, I’d be perfectly ok with a President who said, “I don’t care for guns and have little interest in using them for any reason.  Indeed, I think owning a gun is a poor use of one’s freedom.  However, I do think that the Constitution secures the individual right to bear arms, and since I have pledged to support and uphold the Constitution, I will work to protect that right even as I disagree with its exercise.”  This is how I think about many rights that individuals enjoy and often (unfortunately) exercise.  Yet, I don’t believe the President really cares what the Constitution says nor that he should let it get in the way of his policy preferences.

Second, it is probably not chance that Obama is shooting a shotgun in the photo since this is how the Dems are trying to triangulate the gun control issue – “We don’t want to stop sportsmen from owning and shooting guns.  But true sportsmen don’t need ‘assault weapons.'”  I’d be more convinced of Obama’s credibility on the 2nd Amendment if the WH showed him firing my handgun of choice: the Smith and Wesson M&P 9mm.  But that would hurt the narrative even though the Administration claims it isn’t going after handguns (despite the fact that Marc pointed out earlier that these are the real weapons of choice for those killing others).

6 thoughts on “President Obama and the 2nd Amendment – Just Be Honest, We Can Handle It”