Dragnet’s Joe Friday may have never uttered those words, but he would be impressed nonetheless by the facts on crime. There was a fascinating piece by Erik Eckholm in yesterday’s New York Times on the

dramatic reductions in crime over the past several decades. Overall, crime peaked in 1991 and has fallen steadily since then.

All of this leads to the big question: why? Is it a change in tactics (e.g., aggressive policing, the “broken window” theory)? Is it a product of an increase in the costs of criminality (e.g., mandatory sentencing and the decision to keep 1.5 million people in prison)? Is it a product of good economic times? Perhaps it simply reflects demographics (e.g., the aging of the population, the decline in teenage pregnancy)? In the end, law professor Franklin E. Zimring (UC-Berkeley) is quoted as describing the search for an explanation as “criminological astrology.”

Max Ehrenfreund (Washington Post Wonkblog) has designated the above “chart of the day” as “something of a Rorschach test. Everyone sees what they want to see in it.” That may be something of an overstatement. Certainly, the advocates of the war on drugs, police militarization, aggressive policing and harsh sentencing laws will view it as evidence that their strategies have worked. They will have the challenge of explaining why similar trends are evident elsewhere, including Canada, that have not embraced the US model. And I am not at all certain of how the Left would make sense of the fact that crime has fallen as inequality has increased.

Will the decline in crime have an impact on public policy? Will it lead to a rethinking of police militarization and mass incarceration? I hold little hope given that public opinion seems immune to the facts. 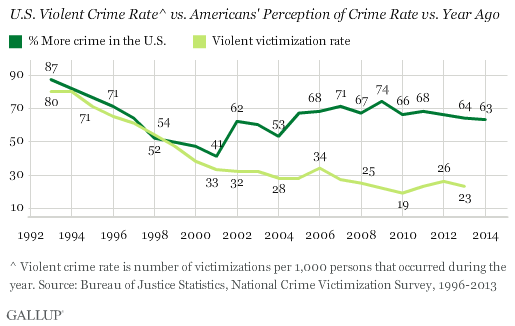 Even if crime has fallen dramatically, according to Gallup the majority of Americans in most years on record believe that crime is getting worse. As Gallup observes: “federal crime statistics have not been highly relevant to the public’s crime perceptions in recent years.” A public concerned with crime and (willfully) ignorant of the long-term trends will continue to demand an aggressive police presence. And that demand will be met.