The number of people ages 18-64 receiving Social Security Disability Insurance (SSDI) under the Old-Age, Survivors and Disability (OASDI) program has increased dramatically in the recent past. Ana Swanson (Washington Post, Wonk Blog) has brief piece that focuses on SSDI. It includes a map (by Seth Kadish, Vizual Statistix) graphically representing the percentage of beneficiaries who are retired  (the lighter the color, the lower the percentage retired). 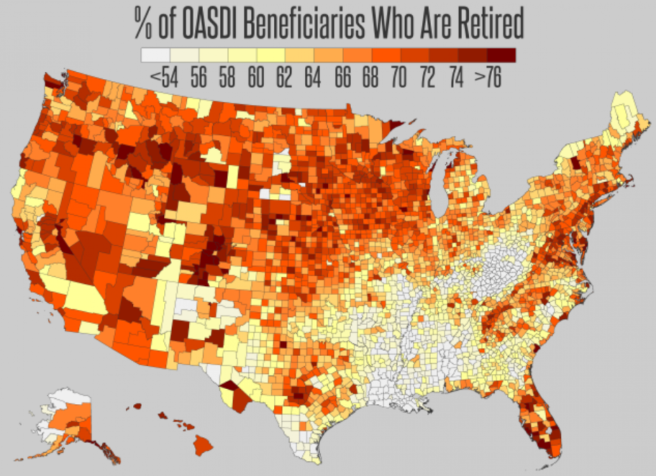 The expansion of disability is partially an exercise in cost-shifting in an economy that is failing to provide jobs. As Swanson notes, some of the increase is a product of aging (the older you get, the more likely it is that you will become disabled). “But it’s also due to efforts by states, often in cooperation with private companies, to move people off of unemployment benefits, which states need to pay for, and onto disability, which is a federal program.” All of this has an additional benefit: the 9 million disabled workers are not counted as unemployed.

The cost shifting strategy has its limits, of course. The SSDI trust fund runs dry in 2016, which will result in a 20 percent reduction in disability payments. In the past, transfers from the larger OASDI trust fund would have covered shortfalls, thereby delaying the pressure for reform. But this week, the House GOP adopted a rule prohibiting transfers from the OASDI trust fund, suggesting that reform of Social Security Disability Insurance may finally be forced on to the agenda.