What can we learn from capital markets about the likely consequences of Scottish independence? A trio of recent polls has shown the “Yes” side to have pulled roughly even with “No.” With momentum on their side, it’s not unthinkable at all that “Yes” will pull it out, resulting in the first secession from a Western democracy since Iceland withdrew from Danish union in 1944. Most American commentators, from Paul Krugman to Tyler Cowen, oppose Scottish independence and forecast economic disaster for the new country. Are they right?

Let’s look at the behavior of capital markets in Britain since these polls’ release to find out. First, let’s set the stage by looking at how betting markets price the probability of Scottish independence. Unfortunately, there are no nice InTrade-style charts for implicit probabilities anymore, at least not that I can access from the United States. From oddschecker.com, I am able to pull odds from different exchanges from the beginning and end of each day. Looking at the markets with most liquidity, it looks as if the odds for independence moved from about 19.5% Friday night to about 25% Saturday night, after the release of the YouGov and Panelbase polls (the Panelbase poll suggested “No” might still have a small lead). On Monday morning the odds stood at about 23.3%. After the release of the TNS poll Monday evening (confirming the dead heat), the odds moved in to 26.0%.

Next, let’s look at the behavior of capital markets over this period. Here is how the pound has fared against the euro: 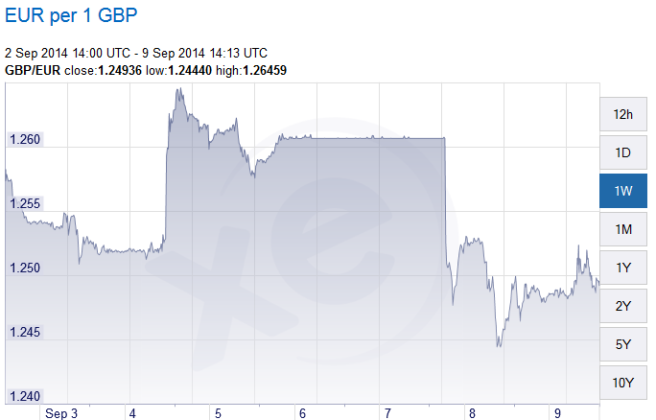 Not much of a correlation. To be sure, the pound fell against the euro when trading opened Monday morning, following the shock weekend poll from Yougov and the somewhat-reassuring poll from Panelbase, but the TNS poll released late Monday night appears to have had zero effect on the pound, even though it did have a small effect on the betting markets.

Now, the pound has fared a little worse against the dollar, because the euro has also dropped against the dollar. This may reflect that traders believe Scottish independence raises the probability of British exit from the EU. But this would not be a direct cost of Scottish independence, and it would ultimately be up to English, Welsh, and Northern Irish voters whether they want to withdraw from the EU.

What about the stock market?

I’ve got the Dow in there for comparison (in green). So the FTSE fell about 0.3% on opening Monday, then drifted downward throughout the day, finally recovering all that ground except the initial 0.3% drop. On opening Tuesday after the TNS poll, it actually rose. As of this writing is down just about 0.4% from Friday’s close. This looks like a muted response to me.

But what about Scottish-exposed stocks in particular? I took the list of top 25 Scottish companies here and winnowed the list down to those listed as having Scottish ownership and being publicly traded. Nine companies fit that test. I then constructed a weighted average of their share prices at Friday close, Monday open, Monday close, and Tuesday open, the weights being each stock’s market cap according to investing.com. Recall that there were two surprise polls, one over the weekend and one released Monday evening, the former having the greater effect on betting markets.

The Scottish index I created lost 1.7% of its value on opening Monday morning, a noteworthy drop because it happened right away. It’s plausible to attribute this drop to the increased risk of independence. However, today it lost nothing on opening – in fact, it was up 0.1%. Still, the total loss to these nine firms’ market value amounts to about $800 million. The fact that there was no further response of capital markets to the TNS poll, even though betting markets did respond, weakens our confidence somewhat that investors are responding negatively to the prospect of independence, but let us work with the assumption that they are.

What would happen to these firms’ value if independence were dead certain? Expected utility analysis helps us here. They lost $800 million in value on an increase in the probability of independence of 5.5+2.7=8.2%. We can infer that an increase from 20% to 100% would wipe out $800 million*8/.6=$7.8 billion. That’s a fair proportion of their existing value: about 16%. Of course, investors are risk averse, and the very uncertainty of the outcome might be driving a fair proportion of the losses.

How to sum up? So far capital markets seem to be telling us that the economic costs of independence to Scotland would be significant but not catastrophic, and that they would be virtually nil to the rest of Britain. How much of those costs are due to the policies Scotland would implement after independence, rather than secession as such? It is difficult to know, but the differential returns to particular firms give us a clue. Transportation companies have closer links to the state, so a more statist policy regime might not hurt them. Financial companies might lose because of the lender of last resort issue (Scotland might not have a credible one). Energy and engineering companies might lose because nationalists want to tax oil heavily to fund social programs. Also, stricter environmental laws may hurt the electric utility SSE, which lost heavily on Monday.

5 thoughts on “Scottish Independence and the Markets”