Ezra Klein is a global warming pessimist. In his own words, “we’re fucked.” 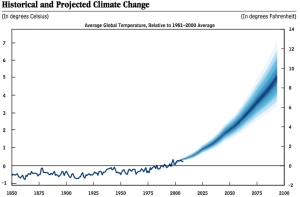 While he gives several different reasons for this belief, the crux of it seems to be U.S. political institutions and parties (the Republicans). Yet he also concedes that other governments are not serious about climate change either.

Indeed, no government has taken serious steps to reduce greenhouse gas emissions sufficiently to prevent a greater-than-two-degree warming by 2100. The U.S., Canada, and Australia all either failed to ratify the Kyoto Protocol or dropped out. The EU, meanwhile, has not seen any significantly different fall in emissions from the U.S. since its regulatory structure came into effect. The biggest emitter, China, shows no interest whatever in any emissions cuts at all.

So why blame U.S. institutions or politicians specifically? Politicians worldwide are taking a wait-and-see approach to global greenhouse gas emissions.

I can think of two explanations for their nonchalance: 1) no government does a decent job of addressing this kind of problem; 2) the politicians know something about the problem that Ezra Klein doesn’t.