Source: Barry Eichengreen, “The Origins and Nature of the Great Slump Revisited”

So U.S. real wages rose more or less throughout the Great Depression. During the Hoover years, you can write this phenomenon off as sticky wages plus the Federal Reserve’s disastrous policy of deflation, plus some of Hoover’s jawboning of executives to get them to keep wages high. But during FDR’s administration, the federal government actually mandated higher wages several times. Of course, that is the last thing you want to do during a depression, because you will just make unemployment higher and therefore production lower than it could have been. And that’s what happened: 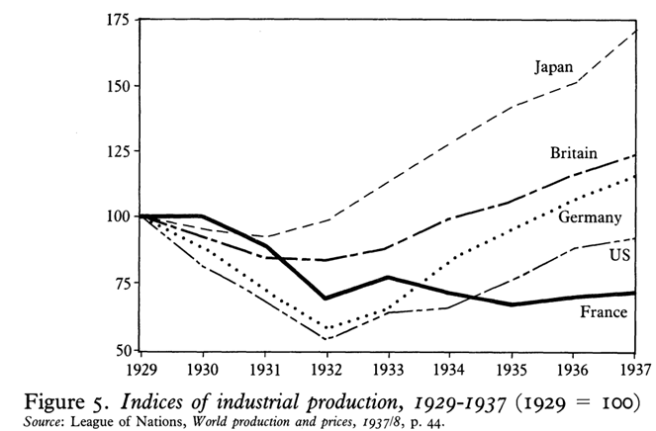 Despite the fact that money supply growth and price inflation were robust after 1933:

By the way, I saw Scott Sumner at a recent conference, and he is writing a book about this. About time someone did!

Update: On Twitter Mike Konczal points me to this paper by Gauti Eggertsson, making the case for the National Industrial Recovery Act on zero-lower-bound grounds. Fair enough – it’s a theoretical paper, and you can make a theoretical case for just about anything. But all of the countries in the figures above were at the zero lower bound at some point. Two things stand out: 1) In general, countries that went off the gold standard first saw more inflation, which was associated with lower real wages, which was associated with better industrial recovery. 2) The U.S. underperformed on industrial recovery and had bigger increases in real wages than everything else despite high inflation after 1933.

On the relationship between real wages and unemployment, Bob Lawson points me to Vedder and Galloway’s Out of Work. See also this negative review of the book by Brad DeLong.