Is federalism for progressives? Libertarians, who are generally enthusiastic about the competitive federalism model, have tried to argue that the model provides, at the very least, a kind of modus vivendi for all ideological camps, allowing citizens in each state to have roughly the kind of government that they want. Relative to a single national standard on every policy issue, everyone is better off, right? Some progressives have agreed, to a point.

The problem is that status quo U.S. federalism is a long way from the competitive federalism model that scholars like Michael Greve favor. (I have contended that competitive federalism is still alive in the U.S. to a much greater extent than just about any other country excluding Switzerland and Canada.) The federal government establishes a firm national baseline on both economic and social policies. First, the U.S. Congress has authorized federal matching grants that incentivize state and local governments to spend their own taxpayers’ money on federal priorities. Even conservative politicians often have political trouble turning down “free” (better: “highly discounted”) federal money. Second, the U.S. Congress has authorized extensive federal regulations intruding into areas previously considered state prerogatives: securities and exchange regulation in the 1930’s (a provincial-only responsibility in Canada), occupational safety and health regulation in the 1970’s, mortgage originator licensing in the 2000’s, and health insurance regulation in the 2010’s, to name just a few examples. Third, the federal judiciary has established a firm baseline on civil rights, civil liberties, and “social” policies, repeatedly striking down laws regulating or criminalizing abortion, sodomy, contraception, and free speech, and, more recently, laws prohibiting gun possession and carrying, enacting public election financing, and authorizing certain regulatory takings. While some of these examples suggest that progressives might have reasons to favor a looser “baseline” from the federal judiciary, the overall historical trend has been for the judiciary to constrain conservative policies. (Note that libertarians typically favor judicial engagement on all or almost all of these questions, distinguishing their kind of limited-government federalism from the old “states’ rights” variety.)

Is there evidence that U.S. federalism as it already exists is tilted toward progressive priorities? I believe I have found such evidence in the distribution of state policy priorities.

Using the Ruger-Sorens database of state policies, which covers the years 2000-2010 (year-end), I have condensed the variance across more than 200 “top-level” policy variables (some of these are themselves composite indices) into their component dimensions using a procedure called factor analysis. The first “dimension” thus derived represents left-right state ideology. It puts states like California, New York, New Jersey, Hawaii, Massachusetts, Maryland, and Rhode Island at one end and states like Alabama, Mississippi, Idaho, Utah, Wyoming, Texas, and North Dakota at the other. I argue that the second dimension reflects largely civil libertarianism-communitarianism, tracking a rural-urban cleavage in U.S. politics. It puts states like Alaska, Vermont, Arizona, New Hampshire, Wyoming, Maine, Washington, Oregon, and Montana at one end and states like Illinois, Hawaii, California, Maryland, New Jersey, and Alabama at the other (see figure). 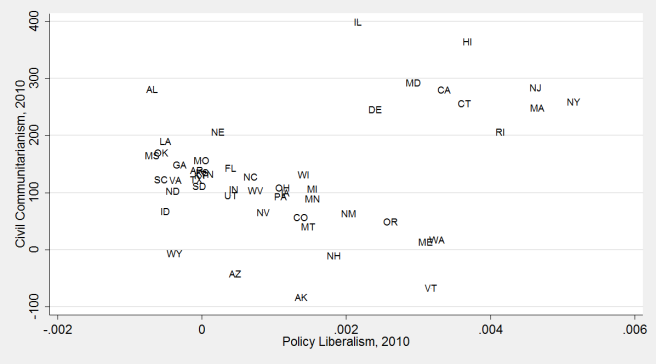 Look at all those states clustered at the left end of the policy liberalism spectrum. This clustering suggests that the distribution of state policies is highly skewed. A simple histogram confirms this observation:

One explanation is that the distribution of state ideological preferences is non-normal. If it is just as skewed as the distribution of state policies, then we can infer that the skewed distribution is simply a result of state governments’ responding to their citizens’ preferences. I use a Partisan Voting Index (PVI) based on presidential vote share for candidates of the left in 2008 to measure public opinion ideology. Higher values mean that a state leans more to the left of the rest of the country. It turns out that PVI is normally distributed.

Then I plot policy ideology against opinion ideology by state: 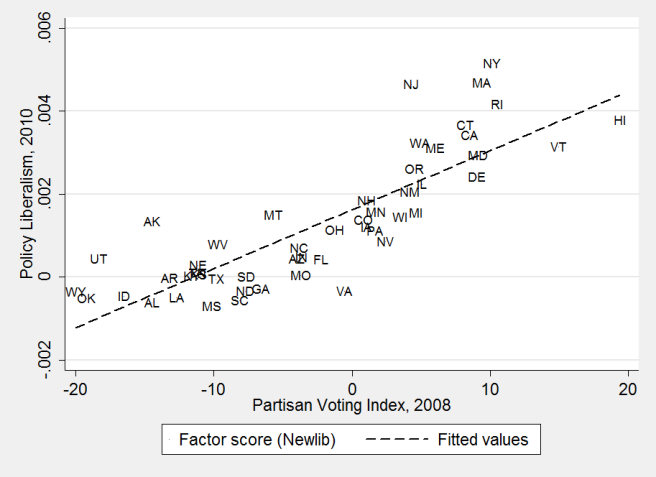 Indeed, more left-wing (respectively, right-wing) states are more likely to have left-wing (respectively, right-wing) policies. But look at the outliers! Virtually every strongly conservative state has more liberal policies than predicted, and so does virtually every liberal state. Moderate states have more conservative policies than predicted. If you only looked at states more conservative than the national average, the relationship between opinion ideology and policy ideology would look basically flat. Conservative states are apparently not giving their voters policies as conservative as they would like. Liberal states, meanwhile, are hypersensitive to public opinion, giving their citizens extremely liberal policies indeed.

I argue that conservative states lack democratic representativeness in their policies because federal courts and the U.S. Congress constrain them. They do not get as small government as they would like, because they would have to give up federal grants, and because federal regulations inhibit how free-market a state can be. They also do not get the restrictions on abortion that they would like, because the federal judiciary repeatedly intervenes to strike them down. (I make no normative claims about whether conservative states ought to be so constrained.)

Liberal states face few such constraints, although gun control, campaign finance, and regulatory takings are emerging areas in which the federal judiciary has struck down a few liberal policies in the states. If that trend continues, and federal grants begin to incentivize policies liberals dislike (like No Child Left Behind?), perhaps progressives will gain an interest in the competitive federalism model libertarians propose. But until then, it is perfectly instrumentally rational for progressives to oppose changes to the distribution of federal and state responsibilities. Status quo U.S. federalism appears to advantage progressive priorities.