In my last post on this topic, I described an ideal system of federalism and its advantages and disadvantages. One of the concerns that progressives often have about this kind of federalism, which I wish to take seriously, is that it will lead to a growing gap between the incomes of rich and poor regions (such as states in the U.S.). In this post, I’m going to summarize my findings on the empirical evidence on the relationship between federalism and inequality.

What I want to explain here is the extent to which different countries feature regional convergence or divergence in per capita incomes. That is, in some countries rich regions grow faster than poor ones, and in others poor regions grow faster than rich ones. The way to measure that is with the “annual rate of convergence,” which represents the average rate at which the differences in per capita income between a poor economy and a rich economy disappear, all else equal. A figure of 2% would mean that 2% of the average income difference between a rich and poor economy disappears each year. Even when convergence is happening, that does not mean that measured inequality between regions necessarily goes down, because random shocks can intervene (such as oil discoveries or real estate busts). But it’s a key question whether federalism can cause regional economies to convergence faster or more slowly (or even diverge).

Here is how some countries differ in their measured rate of regional convergence over the 1995-2005 period, the longest and most recent period for which consistent data are available (regions are defined as the subnational tier of government enjoying the greatest economic self-rule, which is in turn defined below: states in the U.S., autonomous communities in Spain, provinces in Canada, Laender in Germany, counties in Denmark, etc.): 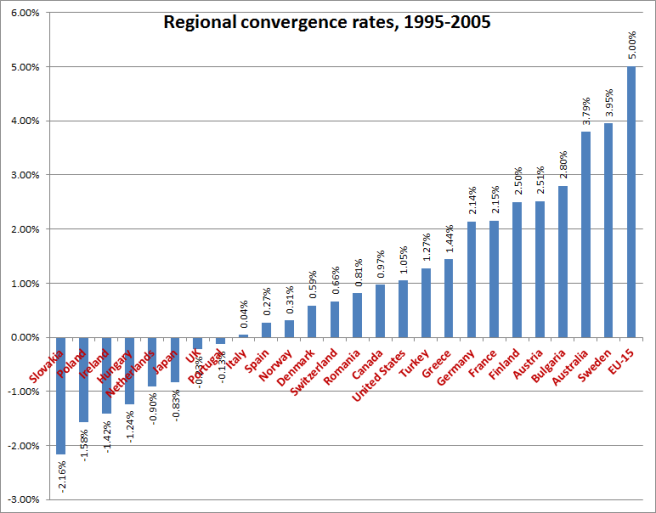 Some countries actually experience regional divergence, in which richer regions grow faster than poorer ones: Slovakia, Poland, Ireland, Hungary, the Netherlands, and Japan, most notably. The fastest converger in the sample is the European Union (the 15-member EU prior to the entry of the postcommunist states and Cyprus). In other words, the gap between poorer EU states and richer EU states was erased at a 5% annual clip between 1995 and 2005. Much of this remarkable performance had to do with the steep rise of Ireland, but even when Ireland is excluded, the EU is a star performer among these “countries.”

In the chart above, there is no clear relationship between how decentralized a country is and its convergence performance. If anything, more decentralized countries might have more convergence, especially since the EU is the most decentralized of the lot. But we can make the analysis quite a bit more comprehensive and rigorous if we extend the data (I have data on some countries’ regional GDP back to 1980), take into account differences in autonomy between regions in the same country (some countries are unevenly decentralized), and conduct regression analysis to see whether the extent of fiscal federalism conditions the convergence process.

where “Y” is per capita income, “r” denotes each region, “c” denotes each country, “t” denotes each year, “X” is fiscal federalism, “LGDPDiff” is log initial difference between regional and country GDP per capita, and “Z” consists of control variables.

Let me now describe the equation more intuitively. Basically, I’m regressing the difference in the growth rate between a region and its country on its economic autonomy (fiscal federalism score), its initial difference in GDP per capita from the country (in logs), and the product of economic autonomy and per capita income difference. It is a pooled model, in which every region-year is an observation. (To stats geeks: no correction for serial autocorrelation turns out to be necessary, and standard errors are spherical. A rare case in TSCS models! Turns out that subtracting country growth purges the business cycle from the data.) Multiplying fiscal federalism and initial GDP per capita allows the convergence process to depend on the extent of decentralization. If convergence is happening in fully centralized countries, the coefficient on “LGDPDiff” (estimate of beta-two) will be negative, indicating that richer regions grow more slowly than the rest of the country. But if convergence is slowed down by fiscal federalism, then the coefficient on the interaction term (estimate of beta-three) will be positive.

Now it is time to describe the key independent variable: regional economic self-rule. It is measured at the regional level and is an index comprised of the following components, which are defined and coded by Hooghe et al. (2010):

The regional economic self-rule index equals Policy scope * Fiscal autonomy * Representation * Institutional depth. It can thus range from 0 to 48. The rationale behind multiplying each indicator together is that if a region lacks autonomy in any one of these areas, its autonomy is wholly ineffectual, but the more autonomy it has in any one of these areas, the more robust will its autonomy be in other areas. For instance, tax-raising powers matter more if the regional government has more policy competencies (it will have more to spend on). I have experimented with different weights for central government veto power, but in an earlier paper validating the fiscal federalism index, I found that a weight of 0.5 seemed to work best. Since the economic self-rule variable varies by region, it can account for situations in which some regions enjoy more autonomy than others. For instance, Scotland enjoys more autonomy than the other component parts of the UK, and the Basque Country and Navarre enjoy tax powers that other Spanish autonomous communities lack. Obviously, no system corresponds to the pure form of competitive federalism that I outlined in my last post, but some countries come closer than others.

The figure below shows how the expected rate of regional growth varies depending on its initial income advantage and its level of economic self rule: 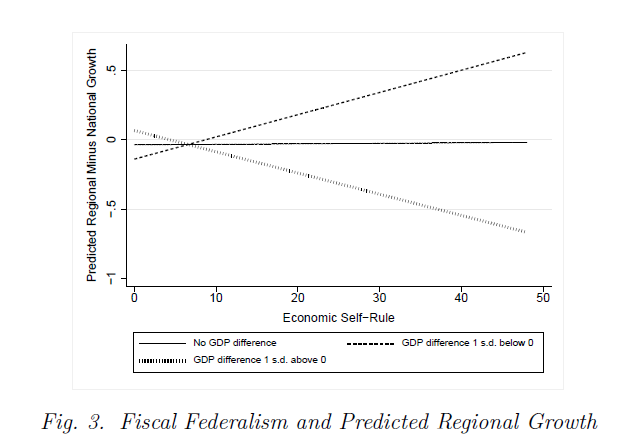 So when GDP difference is a standard deviation above the mean (a rich region relative to the rest of the country), relative growth declines as economic self-rule increases. And when GDP difference is a standard deviation below the mean (a relatively poor region), relative growth increases as economic self-rule increases. For a region right at the national average, fiscal federalism has no effect on the convergence process.

The next figure shows the results in a slightly different way. Here the “Y” axis represents the marginal effect of fiscal federalism on the regional growth rate, and the “X” axis is initial GDP difference: 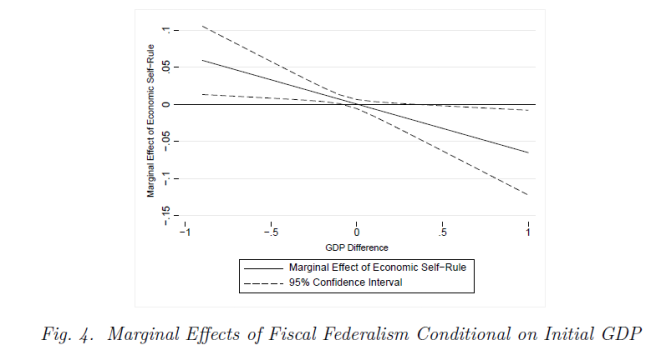 Finally, we can also look at how the marginal effect of GDP difference on growth changes as fiscal federalism changes: 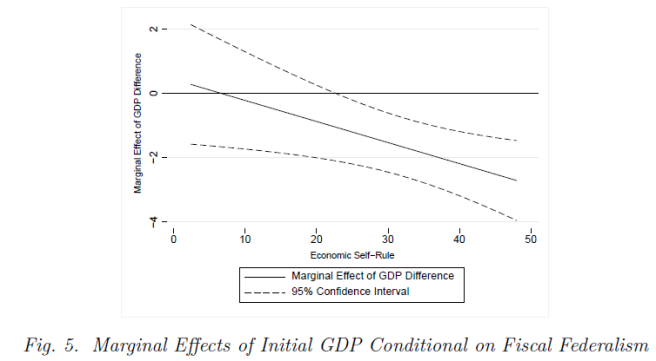 Once fiscal federalism reaches about 24, halfway up the scale, we can be highly confident that convergence is happening. Below that level, convergence may not be happening at all.

If I run the estimates with the EU as a country, dropping the regions of its member states as observations, the results are even stronger, suggesting a steeper relationship between fiscal federalism and regional convergence.

In summary, the results show that fiscal federalism, as it exists today in systems like the European Union, United States, Canada, and Switzerland, is fully consistent with income convergence between rich and poor regions. Indeed, the lack of fiscal federalism is associated with the lack of convergence. It may well be that decentralization actually helps the poor catch up with the rich.