Like Grover, I am pleased that the President has released his birth certificate. The timing does remain a bit odd. I would have advised POTUS to let the birthers run wild for a few more months, forcing GOP candidates to respond to Trump and follow him and the birthers down this rat hole.  The claim that the GOP candidates have no credible plan for the economy (or much else) would have been so much more evident once the birth certificate issue had ripened a bit more. 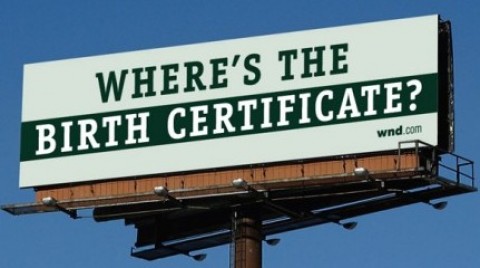 Was the administration’s timing off? Did the administration hope to suck the attention away from Corsi’s book, Where’s the Birth Certificate (which sailed to the top of Amazon sales weeks before publication)? Was there internal polling suggesting that the issue was becoming a serious concern?

Now that the document is out, it will be interesting to see if the birthers move on to another issue (with three wars, a looming fiscal train wreck, and an anemic economy, this would seem to be a target-rich environment). My guess: many of the birthers have too much invested in this issue to let ugly facts get in the way.