The Wall Street Journal had an interesting article yesterday by Stanford economist John Taylor (of Taylor Rule fame) looking at three different U.S. budgets as a percentage of GDP over the next decade.  Here is a chart which nicely tells the tale: 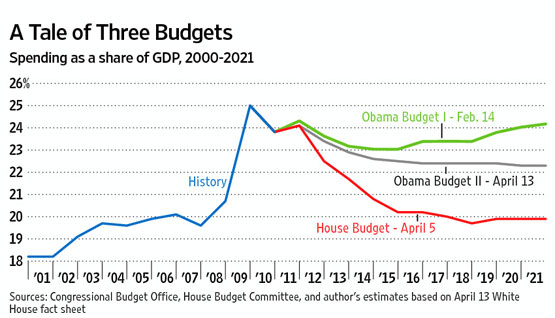 As you can guess, I have a big problem with the use of this term outside its narrow economic sense  because to use it more loosely is to do so either in a sloppy fashion that doesn’t tell us much or as a political weapon  swung against those who don’t think certain things are legitimate targets of government action.

Here is a nice short discussion of public goods by Tyler Cowen.  The defining characteristics of public goods are that they are non-excludable and non-rival.  As you might guess, this means there are very, very few public goods or things that are even close.  If only government focused its spending on these things!