A lot of historical analogies are being made these days to make sense of the current economic scene.  Our own Marc Eisner has recently discussed the possibility of a second dip similar to the 1937/1938 depression within a depression.  Eisner, in particular, worries that all of the frenetic political activity pushed by the Obama adminstration is creating instability and keeping recovery at bay (just as occurred in the 1930’s).

But this time, what might be brewing is a combination of 1937/1938 (markets freaked out by government activity) with a contraction of the money supply similar to what occurred in the early 1930’s.  According to an article in the Telegraph, M3 – a measure of money supply favored by some economists but not tracked any longer by the Federal Reserve – has been falling in ways not seen since the Great Depression.  And just like in that case, governments might be making big mistakes by not realizing that they are part of the problem since, as monetarist Tim Congdon from International Monetary Research argues, “regulators across the world are pressing banks to raise capital asset ratios and to shrink their risk assets.”

An article in the Wall Street Journal on Monday also highlights the potential for deflation:

Meanwhile, the fundamental trend in the West remains profoundly deflationary. Last week the U.S. government reported that the country’s core consumer price index (CPI) inflation rate slid in April to its lowest level in 44 years . . . . In America bank lending continues to decline as does the velocity of money in circulation.

On the other hand, M2 seems to be roughly stable over the last 12 months (April to April) with growth of 1.6% (though it has declined slightly over the last 3 and 6 months).  And the context for this low level of growth is important since it follows a dramatic increase in M2 in the 2008-2009 time period — which led many observers to worry about the return of inflation (or worse – stagflation).  However, solid growth in productivity may mean the money supply should be growing faster. 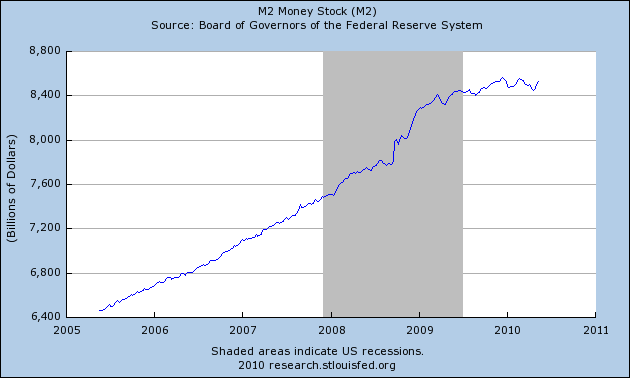 So, should we worry about deflation?  Or still keep our eyes on the possibility of stagflation if unemployment remains high, growth remains anemic or goes negative, and the Fed starts pumping money into the system?  Should we even worry about money supply all that much?  Add to these a million other questions we could ask in these volatile times.

2 thoughts on “Is there a danger of deflation?”